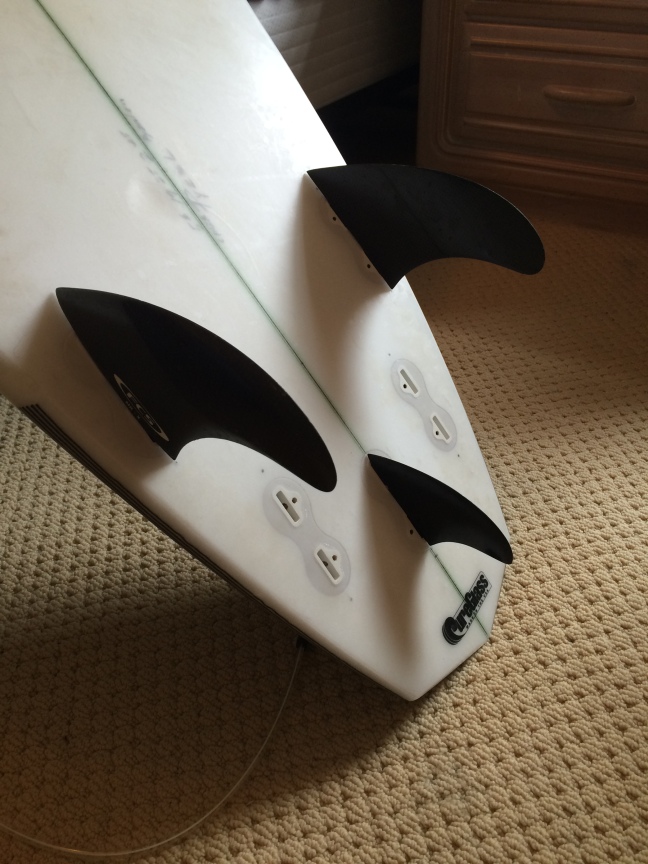 So, first thing’s first. These are some carbon FCS twin fins with MR’s name on them. I have the tri set, which includes a small third fin for some extra drive and control. I’ll talk more about the differences between two and three a little later. I have been riding these fins for about a year at this point on my 5’6″ Pyzel Pyzalien. The Pyzalien is a sick board. It’s a little shorter, fatter, and thicker than your standard shortboard since it’s a “stubbie” basically meant for summer surf. That said, I’ve ridden it in waves a few feet overhead and it still works although the speed wobbles get intense if the face is bumpy.

I would not recommend riding these fins in 8 foot waves though, at least not on the Pyzalien. Any twin fin setup is going to make a board feel loose, so combine that with the Pyzalien’s nimble shape and you have a really rippable, but sorta twitchy setup. In head high waves the twitchy-ness is manageable and adds to the fun. Anything smaller than that and these fins are exactly what you want. I would describe the feeling like riding a skateboard on a wave just because of how nimble and fast these fins make a setup feel. Turns become almost effortless and the speed is immense.

As for the difference between two and three of these fins, I’ll put it like this. With two fins in you may get more speed but you’ll slide around way more, especially when you don’t mean to like during hard bottom turns. Three fins holds much better and the speed and drive are just as good. Unfortunately, I think the three fin option is a few more dollars but I would say it’s worth it.

The bottom line: I would recommend these fins for a small wave board, but they’re good up to head high. The main thing with the TFX fins is that they will make your setup feel pretty loose, which I like but some may not.

Check out my portfolio site: lukaskaefer.com